When Cumberland was laid out in 1893 it was named after Cumberland County in England and the streets are named after the towns from there as well. Unlike most other towns, the names don’t reflect the people who called this area home. To change that an ad hoc committee was formed – the Cumberland Alleyway Sign Project – to research names and fund raise for signs. Four of the signs are up.

The first alley was named by the K’omox First Nation. Dzunuk’wa is the Wild Woman of the Woods, similar to a Sasquatch. She is a bringer of wealth but is also known to steal disobedient children and carry them home in her basket to eat. Dzunuk’wa Alley runs between Camp Road and Derwent Ave.

Tobacco Alley runs between 1st Street and the Community School. Carolina Tobacco was the first white girl born in Union. Terry Tobacco competed in the 1954 and 1956 British Empire Games and the 1960 Olympic Games. He was inducted into the Greater Victoria Sports Hall of Fame. 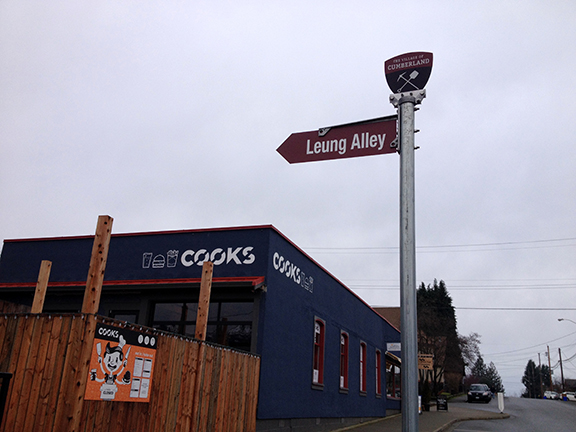 Leung Alley runs beside Cooks Restaurant – which used to be Leung’s Grocery. Leung Gang immigrated to Cumberland in 1914 and worked in the mine until after an injury he took up farming. In 1929 he and wife Annie started the grocery in the front of their house. Son John was instrumental in starting the Cumberland Museum, was Cumberland Citizen of the Year in 1992 and in 2012 received the Queens Diamond Jubilee Medal for Outstanding Volunteer Community Service. Daughter Mae chairs the Coal Creek Historic Park Advisory Committee. 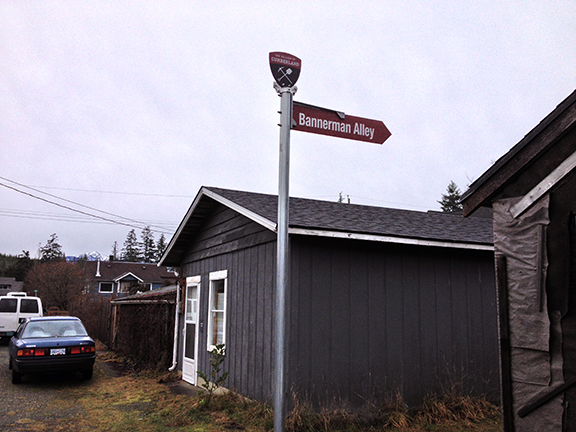 Bannerman Alley is located near the Village Park. The Bannerman’s lived in Bevan and Cumberland, Dan working at #4, #7, and #8 mines. Their son John was one of Cumberland’s most prominent businessmen, and he and wife Alice were untiring community volunteers. John’s son Ron was a local historian who led tours of Cumberland and was one of the main builders of #6 Mine Historic Park. The 4th generation, Ron’s daughter Kim is a novelist with some of her stories set in and around Cumberland.

More signs will be erected as funds allow. Donations can be made at the Village Office.