Gavin Bamber of North Vancouver purchased his winning ticket in the Cumberland Community Schools Society Spring 50/50 Draw because, as he said, “I like to browse through charity lotteries online and read the descriptions about what organisations are doing. The CCSS looked like a good cause, and I think it’s important to support charities, so I bought some tickets”. Bamber, who has never been to Cumberland, was pleased with his win because it was the first time he ever won something, and he planned to celebrate by buying some cookies. He also used part of his winnings to buy tickets to the second CCSS draw, the Fall 50/50 Draw.

Bamber, who has a great sense of humour, had this to say about his win: 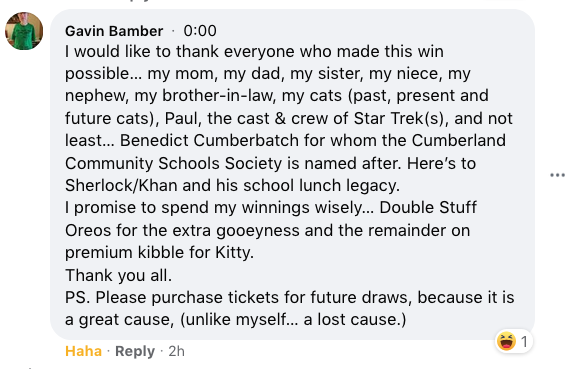 Organisers were stunned when Bamber’s name was again drawn as the winner in the Fall 50/50 Draw, even to the point of checking that there hadn’t been a glitch in the Electronic Raffle System (ERS). The representative from Darelle, one of two certified ERS providers in BC, investigated and said there was no issue, other than that “Bamber is one lucky fellow”.

CCSS Executive Director Sue Loveless stated she appreciates Bamber’s support. “It would be nice if someone from Cumberland would win, but one of the reasons we opted for an ERS was to be able to sell tickets to BC residents outside of Cumberland. We’re thrilled for Gavin and hope he enjoys his windfall.”

Proceeds from the lottery go towards popular CCSS programs such as after-school programs and the Cumberland Food Share. The next lottery has already begun and the winner will be drawn on December 30th. Perhaps you, too, can be as lucky as Bamber!

You can purchase Winter 50/50 tickets here.

Witness the stunning second win in this video. Action starts at 00:30.

A small but mighty and mighty beautiful Truck Para

A message from Euphoria Nature Preschool *********

A couple of wonderful winter markets brought to yo

The Village wants to hear from you! There is stil