Cumberland has been celebrating Victoria Day since 1919. Empire Days is steeped in tradition. With a parade, open market, and local shop specials, all presided over by the May Queen herself.

The celebrations begin Saturday, May 16 at 9 am with a Pancake breakfast at the Legion followed by the popular soapbox derby. Dunsmuir Avenue will be closed to cars from 10 am to 4 pm and a lively market hosted by Elevate the Arts will take place. Stop in at one the village’s great little shops, have a meal in the local restaurants, enjoy a brew at our new local brewery, or head down to the Village Park. There will be activities for kids most of the day, Washoe Tournament at 12:30pm, Golf Hole in One at 1:30pm and a beer garden for the adults.  The Highland Dance Competition is from 10 to 4 at the Village Park and the Westies Dog Parade at 12:30pm is a crowd favourite too.

Come back on Sunday May 17th for the Old Timers Soccer Game at 2pm – one of the weekend’s best highlights! Cumberland has had a long tradition of soccer – dating back to our coal mining days. The multi-generational soccer teams are made up of the family and friends of those players who first played in the Cumberland United Soccer Club as far back as the early 1900’s.  As well the “Legends of the Maypole” is another fun-loving tradition with a new twist! Adults who danced around the Maypole as children are invited to dance and this year parents and guardians of the children who are dancing on Monday are encouraged to come out and try not to tangle the ribbons! This event takes place at 1pm at the Maypole in front of the stage at the Village Park.

On Monday May 18, a #2 Cumberland special event transit service will be offering $1 rides between Courtenay and downtown Cumberland. Be sure to watch the Mayday parade, cheer on the fire trucks, and follow the crowd to the Village Park to see the crowning of the May queen. The entire community will be out to see the traditional Maypole dance where generations of Cumberland’s residents, old and new, celebrate the return of Spring. Maypole dancing has been a part of Cumberland Empire Days for over 100 years. The Cumberland and Royston elementary schools have been teaching the dance for generations – inviting local children and their families to participate in the event.

Whether you come for the street market, the parade, to see the crowning of the May Queen, dance the Maypole, or enjoy festivities in the park, Cumberland is the place to be on the Victoria Day weekend.

For a full schedule of events visit www.facebook.com/CumberlandEmpireEvents 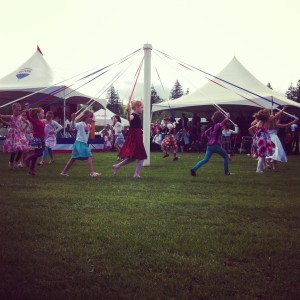 May pole Dancing is a tradition in Cumberland that goes back to 1919. 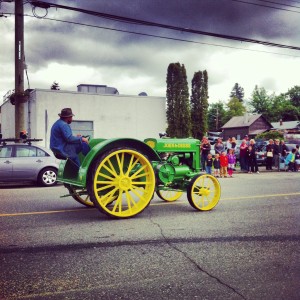 Vintage Tractor in the 2015 Parade 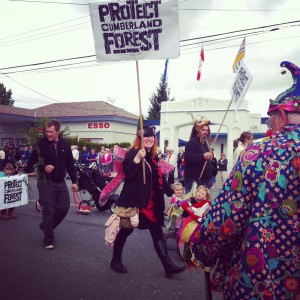