Cumberland resident Jan Neuspiel has lived and worked in Nepal since 1985. A few years back he met Nepali film director Hari Thapa in the Khumbu (Everest) region of Nepal. Thapa was in Khumbu touring the film he had recently released called “Sherpa’s the True Heroes of Mount Everest”. Neuspiel and Thapa became acquainted and at one point Neuspiel asked Thapa if he could screen his new film to audiences in Canada to benefit charities. Thapa readily agreed. Fast forward to the present day and the recent calamity in Nepal presenting the perfect opportunity to screen the film in benefit of earthquake relief.

Sherpa’s the True Heroes of Mount Everest tells the true story of the work that the Sherpas do on Everest. Unlike most Himalayan Mountaineering films, this one tells the stories not from the perspective of the western conquerers of the peaks but from that of the Sherpas who actually do the bulk of the work and take inordinate risks to get the western climbers to the top. With the Sherpas as the main characters and indeed the high altitude camera men and a Nepali director, this film offers a view of commercial climbing on the world’s highest peak that is unique and enlightening. It also gives the viewer a closer connection to the lives of some of the same people who are so severely effected by the earthquake at present. 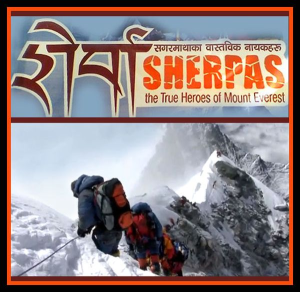 Neuspiel will introduce the film and will also be on hand afterwards to lead a discussion on the issues that the film raises.

The film is presented in conjunction with Cumberland Community Schools Society. Entrance is by donation.

When: Thursday May 14, 2015. 7-9pm.
Where: Cumberland Community School Elementary Gym
100% of proceeds will go to relief organizations listed by the government of Canada for matching of funds so that all donations will be doubled.