Join author Kim Bannerman for the release of her newest historical mystery novel, ‘The Agony of St. Alice’, at the Cumberland Museum and Archives on October 19 at 7 pm.  In this new novel, the sequel to ‘Bucket of Blood’ and ‘Mark of the Magpie’, Lizzie Saunders finds her hopes for a secure life in ruins, and must flee from the law with the help of an unexpected traveling companion. Her journey will take her far into the snow-bound wilderness, where monsters prowl and hunger reigns, and the winter turns weak men cruel. 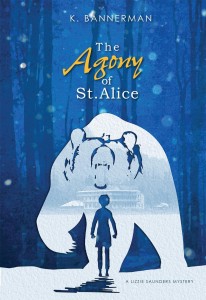 Kim Bannerman writes short stories, novels, and screenplays from her home in Cumberland. Her work has appeared in journals like Room of One’s Own and Parabola Magazine, and in anthologies like the ground-breaking Paraspheres (2006), 100 Stories for Queensland (2011) She’s Shameless (2009), Wolf-Girls (2012), Girl at the End of the World (2014), In the Company of Animals (2014), In An Unknown Country (2016), and Nothing (2018). She is the author of six novels, including ‘Bucket of Blood’ and ‘The Tattooed Wolf’, and along with Shawn Pigott, runs Fox&Bee Studio.

The Lizzie Saunders mystery series takes place in British Columbia in 1898, and in addition to reading from the new book, Kim will talk about her adventures in writing historical fiction. Admission is by donation to the museum. Copies of ‘The Agony of St. Alice’ will be available for purchase at the release.